A downloadable game for Windows

During the cold war, a global scale nuclear war started, devastating all life on the Earth and giving the unlucky lives that survived bizarre appearances and abilities far from what one would call natural.

Years after, our protagonist, tries to break free from a high-security bunker where she has been locked with her father.

After getting separated you have to sneak your way out because inside of the bunker, mutants reign.

In addition to the game, you can find the GDD of the game, the postmortem and a link to GitHub where you can download the whole project.

I  enjoyed playing this. at first, I thought you just need to hide and run. but you also need to strategize your way out which is nice. it adds a thrill to the game. I was anxious at some point in the game and I love the fallout reference lol. I hope I could play more of your games in the future!

hi, big thx for the game. greetings from germany

Thank you for playing it and sharing it!

Had such a creepy feeling to it! Felt like a horror version of a fallout vault! Loved the atmosphere and the stealth felt good. Also as a fellow Marc this game got bonus points.

Thank you for playing and sharing it! We are glad you liked it!

Such an eerie atmosphere! This game was very fun to play and I really liked the art style :D

I don't know if you've heard of Game Development World Championship before (gdwc2019) but it's a competition for indie game developers where they can submit their games and it's free! It's great if you want some more visibility for the game and it only takes a couple of minutes to join :)

Thank you very much for sharing your experience and letting us know about the competition!

Thanks for sharing the game!

It's an interesting game. I wish there was more story elements in the game like papers the player can pick up to explain how and why there were there.

Anywho, here's my channel for other games I have played. http://www.youtube.com/c/Levont

This is a really Nice game waiting for the full game.

P.S: Monster can't get you if you keep jumping, watch my video I tricked the Monster. :D

Thanks for playing and sharing the game! We'll work on that. It seems like a bug, it should not happen and the monster should be able of killing you on air without any problem if you are in range. Maybe the range is too short, we'll check. Thanks!

Hey! I'm not exactly sure where you are stuck but you can always watch a gameplay and figure it out that way :) It also could be that the controls are for a gamepad, if you are using a keyboard they are different.

From the people's game plays we are detecting some bugs that we didn't know of and what you are describing seems like one of them. Relaunching the game should fix it and if you want you can use Shift+Number to select your checkpoint and Shift+K to kill yourself and respawn at the selected checkpoint.

Thanks for playing and sharing the game!

I wanted to explain to you what happened in your game session as well. You reached the point where the door closed but you did not reach the checkpoint that was after that door. After closing the door you died and, when you die, the doors and the elevators are not resting their state and that door could not be opened again by design (we expected everyone that played the game to be on the other side of the door if the door was closed). It resulted in a horrible game play experience and I'm sorry about that.

I also wanted to show you how were you supposed to overpass that zone with this game play:

In addition, I wanted to say to you that the game is meant to be played with gamepad and, usually, with this kind of little games you should play with the controls shown in the tutorial if they do not have any option to change them (from keyboard to gamepad or vice-versa).

I'm sorry for the trouble but that game was made in a rush as a university project. We could not do a lot of testing to avoid the problems that you had. However, it was on the plan the addition of doors that get the initial state after the player's death and adding a screen encouraging playing with gamepad instead of keyboard. 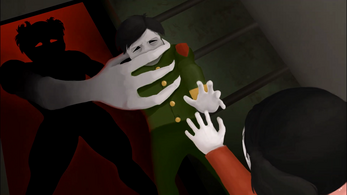 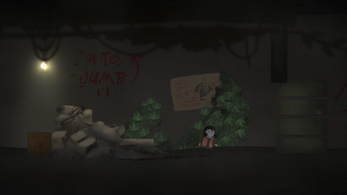 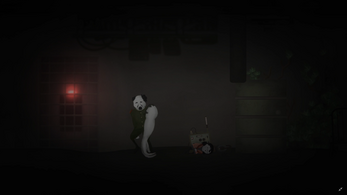 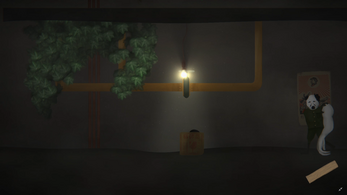